With continuing Covid-19 concerns once again forcing our AGM & Conference online, our 2021 event saw more than 60 people in attendance from the comfort of their own homes. 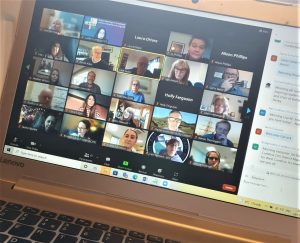 Held on the 24th of November, the AGM kicked off with a welcome from Chair of Trustees, Mike Taylor, and was followed by an introduction from Mrs Claire Hensman, HMS Lord Lieutenant of Cumbria. Mrs Hensman referenced our newly launched Annual Review, and ran through our Mission, Vision and Values, confirming to the audience that we had more than met our aims during a hugely busy year, highlighting that “Cumbria has been held up as an exemplar of community cohesion and collaboration during Covid, and the CVS has played a major part in that reputation”.

David Allen, CEO, then gave a report on a challenging year for Cumbria CVS, praising the incredible work of staff, Trustees and volunteers that took place under very challenging circumstances.

Following a question-and-answer session, the AGM section of the morning concluded and was followed by two guest presenters to explore the question: What is Social Value?

Sarah Vibert, Interim chief executive at NCVO, gave a thought-provoking presentation on the value of Civil Society to Public Service, before Cath Howard, Social Impact Manager, BEP, gave an insight in to what Social Value means, and how to go beyond simple statistics to understand the true benefits of activity.

Breakout workshops then allowed attendees to discuss the concept in greater depth, using their own examples and experiences of delivery to run through four key questions: Why are we doing it? What outcome do we want to achieve? How are we going to measure it? And – What difference did it make?

The AGM and conference received enthusiastic feedback from those attending, with comments including “Delighted, though unsurprised, with all your achievements. Well done!”, “Really enjoyed the talks thank you.” and “Thanks to the CVS staff team for organising this interesting event”.

Our thanks to everyone who attended and took part in a successful and fascinating morning.