At the beginning of September 2021, The Building Better Opportunities Getting Cumbria to Work project hosted two Stakeholder events with local partners, both in Barrow and Kendal.

The purpose of the event was to explain the work of the Building Better Opportunities Getting Cumbria to Work (BBO GCtW) project, which supports people in the Barrow and South Lakes area aged 18 and above, who are either unemployed or economically inactive and are furthest removed from the labour market. 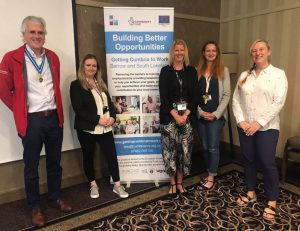 The Building Better Opportunities Getting Cumbria to Work project started back in 2017, and to date is has helped 75 participants gain meaningful jobs, 69 people obtain education and training and given 54 people job search skills.

“An independent calculation this year showed that every £1 invested in the project has yielded an indicative social return on investment of £3.37,” BBO GCtW Project Manager Natalia Wealleans-Turner told stakeholders, partners and guests at the meeting in Kendal.

One of the guests at the Kendal celebration event was High Sheriff of Cumbria David Beeby, who is also chairman of Cumbria Community Foundation. He said: “Cumbria is a great county in lots of ways but there are challenges as well and anything which helps people to progress in their lives is good news.”

He praised the BBO GCtW project for its collaborative approach and added: “It is good to know it is making a difference.”

Future aims of BBO GCtW project is to include developing an outreach programme into communities to help even more people and increasing the number of work experience and volunteer placements.